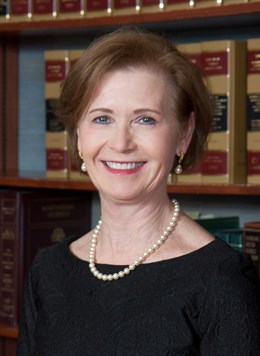 Smithfield Attorney Marcia H. Armstrong has been selected by the State Bar's Nominating Committee to stand for election to the office of vice-president of the North Carolina State Bar. The election will take place in October at the State Bar's annual meeting. At that time, Greensboro Attorney Barbara R. Christy will assume the office of president, and Salisbury Attorney Darrin D. Jordan will also stand for election to president-elect.

Armstrong earned her bachelor’s degree from Salem College and her JD from the Wake Forest University School of Law.

Armstrong was a member of the North Carolina State Bar Council from 2011 – 2019, during which time she served as chair of the Legislative Committee as well as the Opioid Summit Special Committee, and was a vice-chair of the Grievance Committee.

A partner of The Armstrong Law Firm, PA, Armstrong has been a board-certified specialist in family law since 1989. She is a frequent speaker and course planner at law schools and at continuing legal education programs sponsored by the North Carolina Bar Foundation. She has written and presented manuscripts on a wide range of family law topics.

Armstrong practices law with her husband, Lamar; her son, Lamar III; her daughter, Eason Keeney; and her son-in-law, Daniel Keeney. Lamar's wife, Beth, is a second grade teacher. Armstrong’s other son, Hinton, is a biochemical engineer, and his wife, Anna, is a pharmacist. They reside in Smithfield. Altogether, there are five grandchildren, all under the age of four.

View All Forms
Invoice Alert
If you experience problems seeing or printing the invoice, please right click on any portion of the invoice window you can see and select print.


Need Help?
Send Us A Message

See our staff directory for contact information, or send an email to the North Carolina State Bar by filling out the fields below.